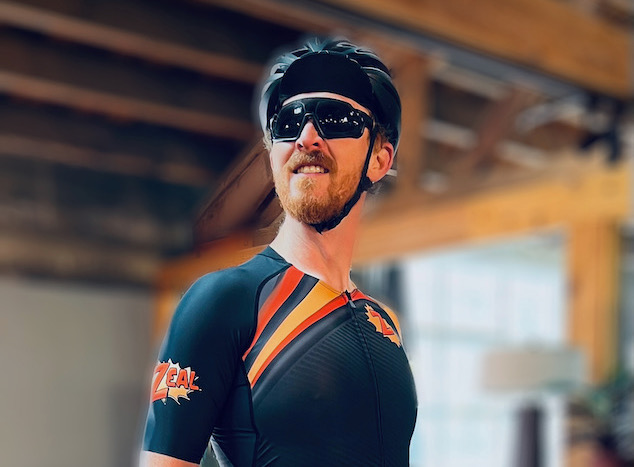 What have you never given yourself the credit to attempt or achieve?

What’s one thing you never gave yourself the credit to do or even attempt because you had a limiting story?

When I was 14 years old, I was diagnosed with lung cancer. Before knowing the underlying issue, the tumor wore a hole in my left lung. During a camp outing, the hole caused the lung to collapse (“burst”), which put me in the hospital.

When a lung collapses and air gets between the cavity, the body will shut it down. It’s beautifully efficient that way. Dr. Asaph, who I thankfully learned later was not Dr. ASAP when it came to performing my surgery, eventually removed the left lung in its entirety after other options were explored.

In all the body’s wild and miraculous ways, the empty cavity - where my left lung once was - filled with fluid and hardened. At the same time, my heart, esophagus, and trachea quickly shifted to the left, and my right lung expanded to hold ~90% the capacity of two normal lungs. As I got older and I grew taller, it all shifted back to normal. Incredible, right?

Lucky for me, the scar from my lung removal goes 18 inches across my back, so it was out of sight, out of mind. For many years I lived a seemingly unaffected life. I could run, jump, and play like many other kids, but as an adult a new, more harsh reality came to bear. While the scar was hidden from daily view, my wife had a different experience. For her, she saw it anytime I got out of the shower. For her, it was a continual reminder of my mortality. While I rarely felt anxiety about it, she did.

I never shied away from telling my story, but I didn’t shout it from any rooftops either. Looking back, I didn’t want it to define my potential, which I later came to realize was exactly what I was doing by not embracing it.

My story is the lens I see the world through. It is part of my history, and it can, if I would let it, empower my future - and there’s the rub.

The most common questions I get from others were:

To the first question: Yes, you can live with only one lung! :)

To the second question: I don’t know. Up until recently, I had never put it to the test.

Other than t-ball, I’d never been into sports or athletics. I couldn’t tell you what I was missing. The thing is, having one lung hasn’t held me back yet.

How much of my limitation was more about a lack of trying, however? How much of it was a perceived limitation? What convenient excuses had I been relying on to not push myself?

In late 2017, I would attend a conference that changed my life. Not because the conference itself was amazing - though it was - but because it inspired me to ask of myself: What have you never given yourself the credit to attempt or achieve?

With almost no knowledge of triathlon, I blurted out “an Ironman!”

Over the subsequent 3 1/2 years, I’ve been building up my endurance to finish an Ironman. On Sunday, October 24th in Sacramento California, I’ll put all my effort to the test.

Over the last few years I’ve had to reset my understanding of what is possible for my body, I couldn’t lean on other skills to cut corners or not fully lean in. It was something that I had no previous skill in and comprehension for. I couldn’t charisma my way out of an Ironman for example. It took planning. It took focus. It took the help of other people. I had to show up almost every day for over three years. But, I did show up. I pushed through really dark times, mentally. I had to listen to my coach, my wife, and my friends and family tell me “It’s worth it. Don’t stop.” I had to remind myself - more times than I could count - to just keep moving.

Growth and certainty do not coexist. I can’t grow into something I already know. Change is the only path to improvement. This means that to be better, I have to be willing to get uncomfortable - there is no other way.

So, what’s one thing you’ve never given yourself the chance to achieve? What limitations stand in your way? How can you test whether those limitations are real or imaginary? What would it be like if you challenged your perception of what is possible for you? How would that make you feel? I challenge you to get curious.

You can follow my journey on the appropriately named @onelungdown and LIVE, here. Wish me luck!